skip to main | skip to sidebar

A Different View of the Feria

Friday night I met up with some friends at the Feria, the county fair. Unfortunately I didn't get any pictures that were very good of the rides, the carney or the lights but I was exercising my photo-eye. 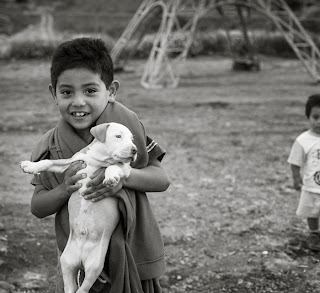 Down in an open spot two little boys were playing with a puppy. They were running around in circles and the puppy was chasing them. First one boy would run and then the other. The puppy was a busy puppy but he was enjoying the game. I asked the oldest boy to let me take a picture of his perro. He picked him up and brought him over. Little brother was not so sure about this crazy gringa with a camera. 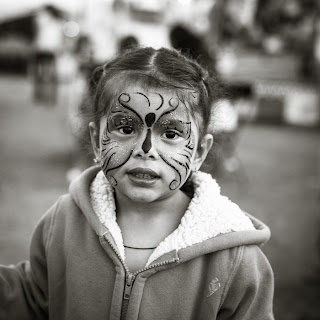 I saw this little girl with her face painted. She was with her Mom. I asked for permission to photograph her and Mom said yes. 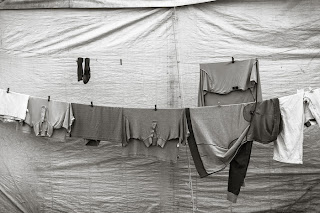 Even the people who travel and work the fairs have to have clean clothes. I can't resist a clothes line either.

So if you just saw these three images you probably would not guess I was at a Feria, but I was there. I was seeing it a little differently.
Posted by Billie Mercer at 9:00:00 AM

Ferias are fun, surely. But I love your everyday photos in this blog post. I need to remember to look for photos of clothes on the line.

Billie: I don't think your photographic eye needs any exercising. It's terrific as it is. Just one question: Why did you print these images in black and white?

Laurie, you don't see clothes on the line very often in the US but it is such a memory trigger for me because I grew up in a time when we did hang clothes on the line. At the time I never really thought about it but now I realize that those clothes tell a lot about the family who hung them.

Al, Black and White images are really my first photographic language. Lately I seem to be going back to more B&W. Also, they are different from the many images I've taken at the fair in previous years. So maybe it was a way of saying that as well.

Billie Mercer
San Miguel de Allende, Mexico
A widow, after 56 years of marriage, I'm starting a new phase in my life and the old Billieblog just didn't seem to fit. I'll be writing about finding my way.